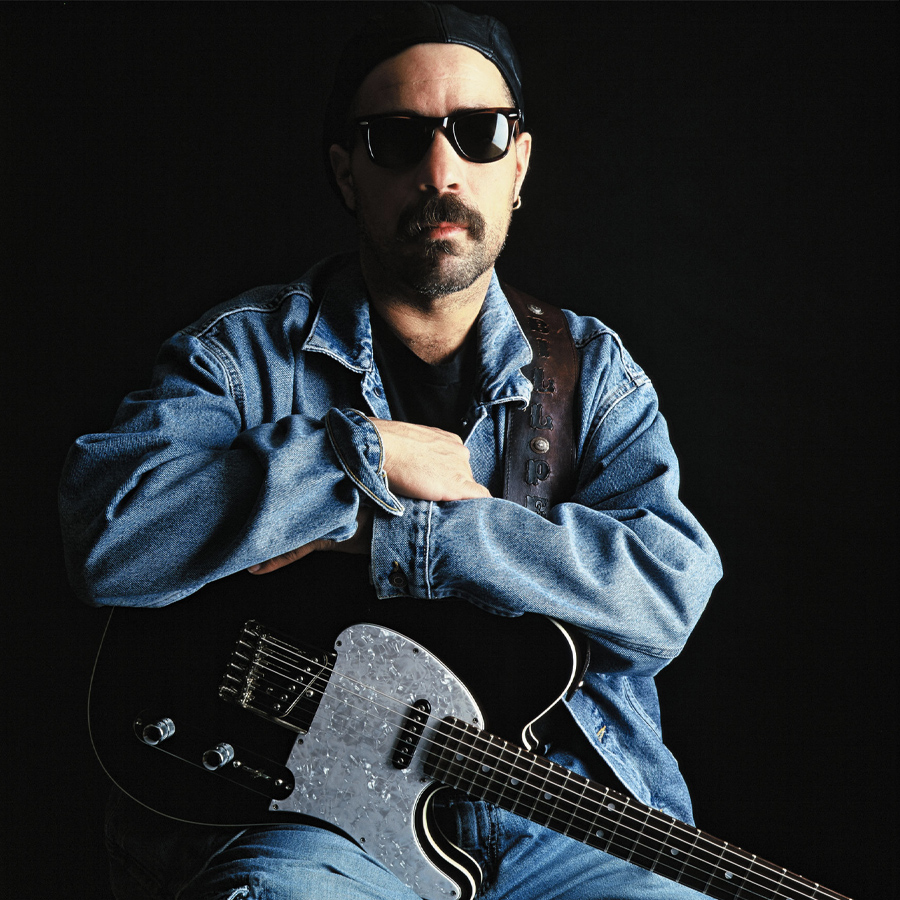 Bill Perry ranks among the best of a new generation of blues performers.  He’s a stunning guitar master, or, as Guitar One put it, a “six-string superman more powerful than a locomotive.” He’s also an intense, highly expressive singer and a superb songwriter.  His music reflects his New York City sensibility – passionate and somewhat menacing.

Born and raised in the Hudson River town of Chester, New York, Bill was presented his first guitar at the age of five.  “Right away,” he says, “I could play the theme from ‘Batman.’”  Like Charlie Parker and Jimi Hendrix, Perry’s parental heritage is half Afro-American and half American Indian, and he grew up in a household surrounded by gospel and blues music.  “My father used to listen to Jimmy Smith and B.B. King, and my grandmother played organ in church, so I was always around this kind of music.”

Eventually Bill gravitated to the rock sounds of the 60’s.  His favorite guitarists were Jimi Hendrix, Duane Allman, and Johnny Winter. It was his discovery of their sources of inspiration that led him back to the blues.

Perry took his cues from Albert Collins, B.B. King, and his personal favorite, Freddie King.  To this day, when Bill is not gigging or in the studio, he listens to Freddie King.  “I love traditional blues and I listen to it at home a lot.  But to play the really classic old blues stuff wouldn’t be natural for me, because I don’t come from that. I liked Johnny Winter and Eric Clapton because they turned blues around in their own way and made it popular.  That’s what I’m trying to do.”

Although Perry’s guitar style is influenced by his early favorites, he has always sought to develop his own technique, which combines effortless fluidity and incredible attack. “Albert Collins was one of the best of the contemporary blues players who had this really distinctive style. You’d know within three notes, ‘Oh, that’s Albert Collins.’  I think it’s the right thing to do, to do something different with the blues, to keep the music evolving.”

As for Bill’s voice, a distinctive, deep rasp full of grit and gravel, it is particularly suited to the blues, convincingly conveying the drama and emotion that are so essential to the music. As the Atlantic City Press put it, “Perry’s voice sounds like it’s been soaked in the smoke and whiskey of a thousand taprooms.”  He puts considerable effort into his phrasing of lyrics and also has the rather unique ability to sing while playing guitar solos.

As a teenager,  Bill was sneaking into the legendary Greenwich Village blues club Dan Lynch and began jamming with all the local blues musicians. Soon after, he put together his first blues band and started gigging in New York and New Jersey nightspots.

One night, after playing a set of Hendrix songs, Bill was approached by the famous folk singer Richie Havens,  who asked for his phone number. “One day he called me up out of the blue and asked if I wanted to do a gig with him that weekend.  I asked, ‘Where’s the gig?’ and he says, ‘Japan.’  I’d never flown before on a jet, but next thing you know I’m on a plane to Japan, and I don’t even know his songs!  Richie said, ‘Don’t worry, you’ll do fine.’ And just as we’re ready to go on stage, he whispers to me, ‘Just play like B.B. King behind me.’ That was it. I did that for four years.”  Today Bill continues to play with Richie on occasion when he is not touring himself.

From 1988 to 1992, while Bill was on the road with Havens, he spent a lot of his time honing his songwriting skills.  “The whole time I was out with Richie, I was coming up with different ideas for blues songs.  I went back even further, and started getting into Curtis Mayfield’s songwriting, and  got into a heavy soul thing for a couple of years.  Then I started getting back into doing just straight-ahead blues.”   In 1989, Perry served as the lead guitarist for Rick Danko and Garth Hudson of The Band as part of the 20th anniversary Woodstock tour of Europe.

In 1994 he was signed by local blues label Rave-on Records and recorded his first album, Love Scars.  Johnny Winter’s manager heard the album and convinced Point Blank/Virgin to buy the master and re-release the CD in 1995.  The critics sat up and took notice. Bill was featured in Guitar Player, which said, “Bill Perry has it all – hip songs, a gritty, emotion-charged voice, devastating tones, and a powerful phrasing delivered with a stranglehold vibrato and knockout attack.”  Blues Revue was equally impressed: “On this startling debut, Perry has a commanding presence as a guitarist, singer, and songwriter.  His blues are fresh, passionate, and forceful.”  The British publication Blues & Rhythm called Perry “shades of Hendrix and Stevie Ray Vaughan, without ever losing his own bluesy inventiveness.”

Based on the success of the first CD, Bill then recorded  Greycourt Lightning, which was released on Point Blank/Virgin in 1998.  Jazz Times called the album “a set of fresh originals highlighting Perry’s considerable chops and heartfelt vocals. This sophomore outing ranks right up there with the best contemporary blues offerings.”

On stage, Perry earned a reputation as a mesmerizing performer who plays with passion and excitement. In 1999 he released a live recording entitled High Octane on Car Wash Records that became one of the most critically acclaimed live albums of the year.  Calling his performance of a Jimi Hendrix tune “nothing short of a masterpiece,” Blues Revue stated, “Here, Perry’s musicianship is truly alive, from the innovative arrangement to the incredible psychedelic fire of his guitar solos.”

Perry’s rousing, crowd-pleasing performance at the Bishopstock Blues Festival in England in 1999 sparked the interest of Blind Pig Records (Dixiefrog’s partner for some licenses in Europe) and eventually led to a recording contract. The first album for Blind Pig/Dixiefrog, Fire It Up, was co-produced by Jimmy Vivino of “The Conan O’Brien Show” and released in 2001.

Guitar One magazine said the CD was simply “searing, scalding electric blues,” while Jazz Times called it “a compelling showcase of guitar heroics and good old-fashioned soul.” Jazz & Blues Report said, “Throughout, there is a general slowing of Perry’s previous pyrotechniques to give quarter to a more refined soloing and even some acoustic stringing.  Make no mistake about Perry’s seasoning; he has added spice which makes his combination of earthy vocals and strong guitar action a dynamite attraction.”

The critical acclaim and exposure allowed Perry to take his muscular, hard-as-nails brand of blues overseas.  After several successful tours and festival appearances in Europe he’s established a strong following of fans there.

His next CD for Blind Pig/Dixiefrog Crazy Kind Of Life, was released in October 2002. Perry and co-producer Jimmy Vivino wrote all the songs, with the exception of the Rolling Stones chestnut “No Expectations,” on which special guest  Richie Havens achingly interprets one of the best blues tunes to ever come out of the rock idiom.   Billboard called it, “An exceptional outing for guitarist/vocalist Bill Perry.  He has definitely hit his stride as a solo artist.  His vocal work is steady and rugged enough to deliver his blues message. His guitar work on these tracks is powerful and incisive, and he plays with a wise economy.”

Guitar One magazine recognized his growing status as a triple threat: “Muscular blues-rock with virtuosic guitar has had its share of proponents since Stevie Ray Vaughan left the planet. Though most fall short of SRV in the vocal and songwriting departments, Bill Perry, on the other hand, pens numbers both tough and tender and can growl convincingly with the best of them. Oh  yeah, and he kicks much ass on guitar.”

Blueswax raved about the CD, “The whole package is presented here, great guitar work (including some caustic slide work and tasteful wah-wah), vocals with a snarl, songwriting and superior production. In other words, modern Blues Rock with a touch of The Funk, which means at its very best.”

On Raw Deal, New York legend and postmodern blues master Popa Chubby took over the producer’s reins (and also guests on three tracks).  His approach was basically to let Bill be Bill.  “This cat can play the guitar, man, and I don’t mean just spewing out licks. No way, man, he speaks. He speaks because that’s his voice. I told Bill, ‘Man, write songs about your life, about who you are, and what you do, and let’s put up some mikes and let the magic happen.’”

Well, the magic did happen on Raw Deal, with Perry’s guitar ferocity, gutsy vocals, and go-for-broke intensity highlighting the album. Finally, Bill Perry’s raw talent has been harnessed and captured on tape.

Blind Pig (and Dixiefrog for Europe) will release later the album “Don’t know nothing about love”, but, unfortunately, Bill left us on july 17th 2007, much too early. 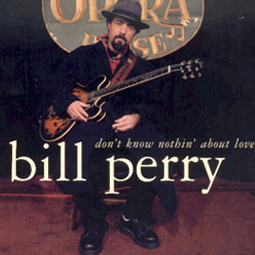 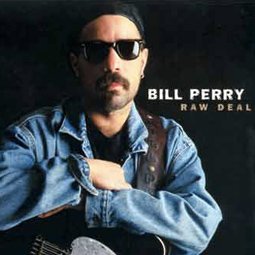 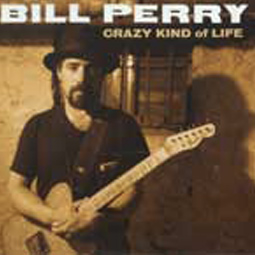 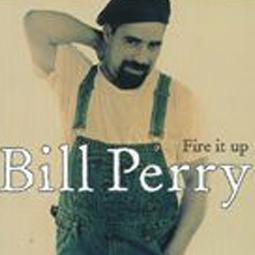