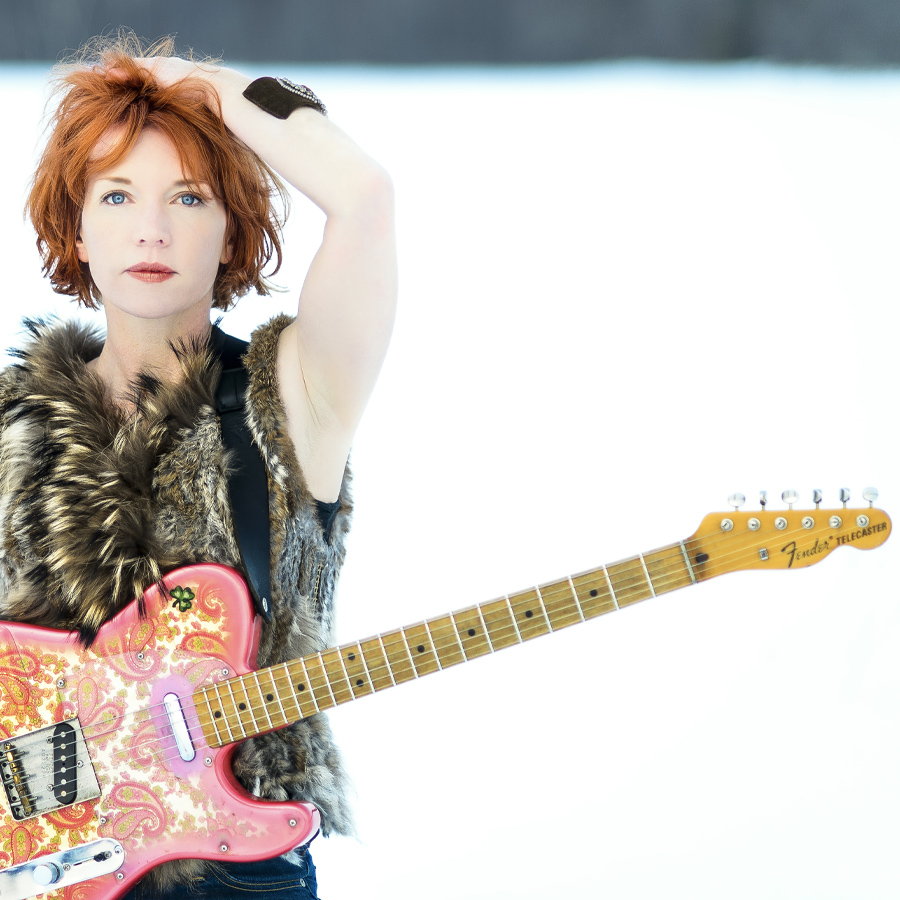 Born and raised in Ottawa, Canada, Sue Foley hails from a music-loving, working-class family. For her thirteenth birthday, she received her first guitar. At sixteen she was gigging around Ottawa clubs, at eighteen she left home for Vancouver, British Columbia where she declared : “I’m gonna play as good as any man, and I ain’t gonna be no rhythm player.”

By twenty-one, Foley was living in Austin, TX and recording for Antone’s – the esteemed blues label and historic nightclub that helped launch the career of Stevie Ray Vaughan -. Her first release, Young Girl Blues, quickly rooted her unique talents as a proficient blues guitarist, inspired songwriter and captivating vocalist. Foley has toured steadily with her band, since, armed with her pink paisley Fender Telecaster signature instrument.

Three decades later she totalizes 15 albums oh her own and look part in 10 more as guest artist.

The musicians she played with, sat in or opened for reads like a who’s who of contemporary blues, including BB King, Buddy Guy, Lucinda Williams, Tom Petty, Joe Cocker, Rufus Thomas, Johnny Winter, Lowell Fulson, Jimmie Vaughan, The Fabulous Thunderbirds, Bill Doggett, Lester Bowie, Albert Collins, Earl King, Clarence “Gatemouth” Brown, Van Morrison, Nina Simone, Duke Robillard, Lazy Lester, Keb’ Mo’, Hubert Sumlin, George Thorogood, Solomon Burke…As an offshoot to her professional recording and touring career, Foley returned to university to get her graduate’s degree and started a project called Guitar Woman based around dozens of interviews she conducted with the world’s leading female guitarists. From 2001- 2015, she wrote articles, organized and promoted concerts, and worked on a book and a DVD bringing the work of great women guitar players such as Memphis Minnie, Jessie Mae Hemphill, Etta Baker and many others to light.

For her return on the scene, she signed with Stony Plain Records (for North America) and Dixiefrog (for Europe). Her Mike Flanigin-produced label debut, “The Ice Queen”, will be released March 2nd. It was recorded in Austin where she made a real mark on the local scene when she lived there in the ’90s and recorded for the Antone’s label. Joining her as special guests was a trio of legendary Texas guitarists – Jimmie Vaughan, Z.Z. Top’s Billy Gibbons, and Charlie Sexton, along with other top Texan players such as Chris Layton. Around last Christmas, Foley, Gibbons, Vaughan, and Layton did two very successful gigs in their beloved Antone’s as part of the “Jungle Show”.

Sue Foley is back on the saddle again, determined to “become the female Clarence ‘Gatemouth’ Brown. I wanna be seventy-five, a wicked guitar player, and ornery as hell.”